This week on the Wednesday Edition of my Blog Talk Radio (February 13 at 11 AM/Eastern Time) show, Talk Business With Howard, the guests are Stephen Voltz and Fritz Grobe of EepyBird Studios, co-authors of the book, The Viral Video Manifesto: How Everything You Know Is Wrong And How To Do What Works. Video is becoming hotter and hotter to market your business with in 2013. Stephen and Fritz are going to talk about viral video marketing; and share with you how to get your videos noticed. Here’s an excerpt from the book – Chapter 5. Thank you Stephen and Fritz for the guest blog post and for being guests on the radio show this week. -Howard-

I Am The Camera. Take Me There.

By Stephen Voltz and Fritz Grobe 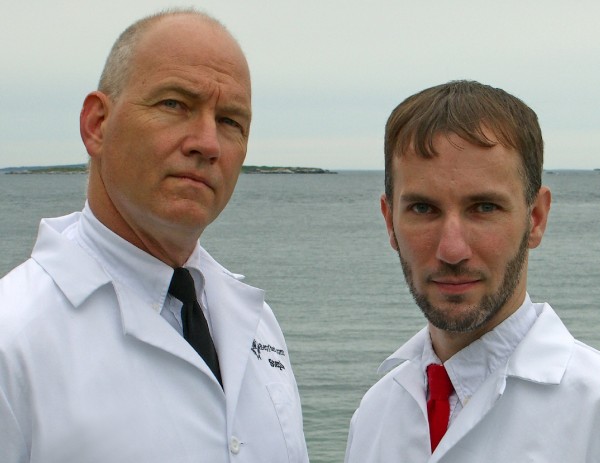 Because viral video is about giving your audience the raw, unfiltered experience of being right there, recording the action with a single, uninterrupted shot is almost always the best way to go.   David After the Dentist, Leave Britney Alone!, Sneezing Panda, Chocolate Rain and Charlie Bit My Finger are just of few of the scores of examples of this.  On occasion however, a single, static camera won’t capture the action.  In videos like our The Extreme Diet Coke and Mentos Experiments II – The Domino Effect, where we triggered 250 Coke and Mentos geysers in one big chain reaction, or OK Go’s giant Rube Goldberg machine for This Too Shall Pass, the action can be so spread out that the camera must move to capture it.

Even so, you still want to show us something real, and you want nothing to interfere with that truth.  When you have to move the camera you can use this simple idea to shape how you to do it: I am the camera; take me there.

To foster the direct, personal connection you have with your audience in online video picture them inside the camera, right there with you as you shoot.

Film and television directors move their cameras all over the set, but with viral video, the camera is the viewer.  You want to treat the camera as if it were a real person.  Ideally, don’t move it at all.  Nor should you put it in places where a real person wouldn’t be.  Don’t have it float through the scene on a crane or on a dolly, because a real person can’t do that and if you use those kinds of camera moves, you’re subtly telling us “this isn’t real.”

With this metaphor, a sudden close-up can be like yanking us off our feet and dragging us toward the subject.  Switching to another camera is like teleporting us across the room.

If you’re documenting something true, how did the camera jump suddenly up onto the roof?  Is this really what happened, or did you do everything all over again for a second camera?

The less you mess with us and the fewer questions we ask about how you got this on film, the better.

Just take us there.

The easiest way to do this is what we saw in the last section: just press record and do it.  That’s the cleanest way to keep it real.

But, when absolutely necessary, there are a few edits and camera moves that can work, and they all follow the mantra: I am the camera; take me there.

You still want to simply press “record” and say, “Action.”  And when you say, “Cut.” your video should be as close to ready for the Internet as possible.

When the action is too big to fit in one frame and you have to move the camera, move it as if it were a person walking exactly where a real person would walk.  Again, show us what it would truly be like if we were there.

Another OK Go video is a nice example of this.  When they wanted to film a giant Rube Goldberg machine synchronized with their song “This Too Shall Pass,” a single, fixed camera just couldn’t capture it.

The huge chain reaction, designed by the L.A. based Syyn Labs, used over 700 household items along a half-mile-long course.  As with White Knuckles with all those dogs, the natural tendency would have been to shoot it in pieces: bring in multiple cameras, capture it in many different takes from many different angles, and put it all together in the editing room.

But they stayed true.

They used a single Steadicam.  It moves along the course of the chain reaction as if we were right there.  It follows just the path we would choose to walk along and at such a pace that we can keep up.

It took two days and about 60 takes to get it right.  And we are the camera, witnessing this extraordinary feat.  That’s contagious.

The entire genre of lip dub videos often requires a moving camera.  A lip dub is a single-shot video of a group of people lip-syncing to a song, with the original audio of the song dubbed on top.  With the people spread throughout a building or even throughout an entire town, the camera moves from person to person, as each one in turn picks up the lip-sync.  One of the best examples of the genre is LIPDUB – I Gotta Feeling (Comm-UQAM 2009) (10 million views).

Directed by Luc-Olivier Cloutier and Marie-Ève Hébert, two students at the Université du Québec à Montréal (UQAM), the video takes us through one of the campus’s central buildings as 172 students – with costumes, props, and choreography – lip-synch the Black Eyed Peas’ hit “I Gotta Feeling.”

After extensive preparation by the organizers, it took just two rehearsals and two takes and they got it.

It was an extraordinary undertaking, and much of the power comes from the truth of it: they had to pull off this elaborate stunt in a single shot.

As OK Go did with their Rube Goldberg machine, Cloutier and Hébert’s  LIPDUB  showed us something real.  They just pressed record and they took us there.  The truth of the event was supported beautifully by the way they filmed it.

So only move the camera when it is absolutely necessary, and when you must move it, remember: I am the camera.

Only Edit Out the Boring Parts

Just as you must fight to keep the camera still, you must fight to avoid cutting from one shot to another.  Any edit that changes perspective triggers our orienting response and interferes with our unfiltered experience of being there with you.

The only tolerable edits in viral video are ones that honestly move us forward in time.

Scotsman Danny MacAskill’s stunt bicycle videos for Red Bull and Inspired Bicycles (Way Back Home, 12.8 million views, and Inspired Bicycles, 26.9 million views) both show sequences of amazing bike tricks, one after another after another.  In Inspired Bicycles, MacAskill even attempts to ride along the top of a wrought iron fence – and it’s nothing but a long row of spikes.  After a couple of impressive but unsuccessful tries, he finally nails it, riding all the way across the entire eighteen- to twenty-foot section.  From there, the video goes into a mind-boggling series of stunt riding tricks performed in locations all over Edinburgh.

It’s not all done in one shot.  MacAskill doesn’t waste our time by showing himself getting up and dusting himself off to try again.  He doesn’t waste our time with shots of him riding from one stunt location to the next.  In this case, one uninterrupted shot would make it a long, boring video.  So he gives us just the highlights, in many pieces.  But every piece of the video follows the rules.  Each individual stunt is shot with a single camera and as little camera movement as possible.  The edits he makes don’t change our perspective; they just move us forward in time.  They are only there to cut out the boring parts without interfering with the truth.  Most importantly, they don’t filter our experience of the stunt and make us subconsciously question whether what we’re seeing is real.

The core of our first Coke and Mentos video was shot in one take with a single camera out in a friend’s field.  In fact, what you see on the video was, at that point, the first and only time we’d ever set off so many geysers.

When we looked at the footage, there were two problems: first, for the audience to understand what we were doing, we needed to explain that we were simply dropping Mentos candies into bottles of Coke; and second, one pair of geysers didn’t go off and we didn’t have the opportunity to go back and try again to get it all in one take.

To address that we added a couple of short additional shots at the beginning to show how the basic Coke and Mentos geyser works.  And if you watch the video online closely, you might notice one edit in the core of the video where we cut out the part with the two bottles that didn’t work.

If we could have, we would’ve gone back and done it all in one take.  As it stands, we can live with the edits, because, like Danny MacAskill’s bicycle videos, each part of the video follows the rules.

Stephen Voltz and Fritz Grobe are co-founders of EepyBird Studios, the company behind the Coke and Mentos phenomenon and other viral campaigns that have been seen over 150 million times. Advertising Age called Eepybird’s Extreme Diet Coke & Mentos Experiments “the most important commercial content of the year.”

Viral video specialists since 2006, their videos for brands like OfficeMax, Coca-Cola, McDonald’s, Blue Man Group, Barenaked Ladies, Weezer and ABC Family have received two Emmy nominations, won four Webby Awards. They were voted “Online Game Changers of the Decade” at GoViral.com and Michael Donnelly, the director of interactive marketing for Coca-Cola, has said their work for Coke had “the impact of a SuperBowl ad.”