The word, leadership, seems to be getting more attention these days.  That often happens during hard times.  People want a leader.  Someone who can inspire them.  Lead them to happier, more prosperous times. 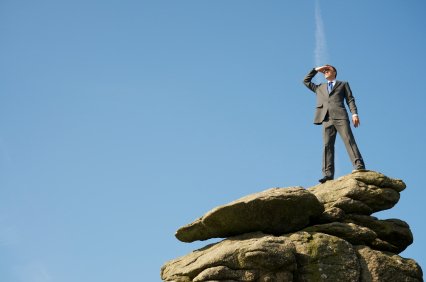 One of my most favorite examples of what it means to be a leader goes back to World War ll.   It was during the invasion of Normandy.  That was a brutal day with great loss of life as American troops landed on the history-making beach.  Servicemen as well as their commanders were being taken down by the enemy as they landed on the beach.  Those surviving the enemy assault were shaken to their very core, literally shell-shocked by what was happening around them.  Two men, Colonel George A. Taylor and General Norman Cota, both coming ashore in different locations, fearlessly rallied and organized the troops that day.

If you have seen the classic movie, The Longest Day with Robert Mitchum, it is the story of General Cota.  (The film, The Battle of the Bulge, also depicts Coda though under a different name.)

General Cota marched forward with his troops into battle and was able to lead them away from the water, off of the beach and press onward into the land and surrounding forest for cover and to ultimately win the battle along with other surviving forces in what is now known as D-Day, a turning point in the war.

This is what it means to be a leader. Throughout history there are many stories of people who found themselves confronting what may seem to be an impossible situation.  But they went forward with focus, clear thought, staying present in the moment, trusting in themselves, what they believed in with determination and a positive attitude.  They took responsibility for making decisions.  This, in turn, inspired and motivated those around them towards success.

It is no different today in business.

As I have always said:  Leaders lead.

No excuses.  No thought of failure.

The question is – Are you a leader?

Please share examples of someone, past or present, you consider to be a great leader and how it inspires you be a leader with your own business.